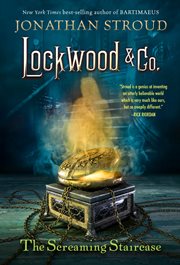 A sinister Problem has occurred in London: all nature of ghosts, haunts, spirits, and specters are appearing throughout the city, and they aren't exactly friendly. Only young people have the psychic abilities required to see-and eradicate-these supernatural foes. Many different Psychic Detection Agencies have cropped up to handle the dangerous work, and they are in fierce competition for business. In The Screaming Staircase, the plucky and talented Lucy Carlyle teams up with Anthony Lockwood, the charismatic leader of Lockwood & Co, a small agency that runs independent of any adult supervision. After an assignment leads to both a grisly discovery and a disastrous end, Lucy, Anthony, and their sarcastic colleague, George, are forced to take part in the perilous investigation of Combe Carey Hall, one of the most haunted houses in England. Will Lockwood & Co. survive the Hall's legendary Screaming Staircase and Red Room to see another day? Readers who enjoyed the action, suspense, and humor in Jonathan Stroud's internationally best-selling Bartimaeus books will be delighted to find the same ingredients, combined with deliciously creepy scares, in his thrilling and chilling Lockwood & Co. series.
Publisher: [United States] : Disney Book Group, 2013
ISBN: 9781423187905
1423187903

What a fun book! Great cast of characters!! I loved them all. What could be better than kids on their own without adult supervision ... and loads of doughnuts? The balance of humor/storyline/action was perfect! I can't wait to read the next book in the series.

I love it< it was entertaining

A solid start to a new series. I will read more of these books.

I love creepy books and The Screaming Staircase by Jonathan Stroud is no exception. I think it's interesting how kids of a certain age are the ones that have the power to help with London's ghost problem and I love the character of Lucy Carlyle. I don't think I could handle some of the ghosts and situations that Lucy has to b/c I'm a total chicken. I've read this whole series and the books totally get creepier as they go.

A real enjoyable read. It was scary, funny, and adventurous.

A new and scary Nancy Drew mystery. As an adult, it did not really seem scary at all but I think that would be different for a young adolescent. The characters were unique and well developed. I enjoyed the read but found it easy to put down between chapters and then pick up again. This could be a good thing for busy middle schoolers.

An excellent book about young, sarcastic British ghost hunters. I'm reminded of Doctor Who (Anthony Lockwood could almost be a young David Tennant), but Stroud has still created something original that is not too creepy* but certainly suspenseful, with excellent characters, a nice dose of humor, and an absorbing plot. While there are hints of a probable future romance, it is not dwelt on, which I appreciate given what is considered romance in fiction these days. If I remember correctly, there was some mild language, but not enough to spoil the story for me. I'm not a fan of paranormal fiction generally in the sense of ghosts and hauntings, preferring the genre of medieval adventures (such as the Redwall series, the Chronicles of Narnia, or The Lord of the Rings), but in my opinion, this book and the two sequels I have read so far are entertaining, enjoyable, and worth the read.

*my personal opinion, not an all-ages recommendation

I am a big fan of the paranormal and other unsolved mysteries. This book fed that appetite and has left me wanting more. Looking forward to the second book in this series.

OPL_KrisC thinks this title is suitable for 10 years and over

abbaluke thinks this title is suitable for 12 years and over

Reyna_Avila_Grace thinks this title is suitable for 10 years and over

BookNerdoftheWorld thinks this title is suitable for 13 years and over

zackids thinks this title is suitable for 12 years and over

Padfoots_puppy thinks this title is suitable for 11 years and over

"May I present to you once again our host and patron, Mr. john William Faifax - Chairman of Fairfax Iron and noted industrialist, onetime actor and, of course, the murderer of Annie Ward."

No I just think you are deluded

Just because, a sample of Stroud's fluent, eloquent writing:

"The caretaker was certainly very ancient, a tight and desiccated thing from which all softness and moisture had long since been extracted. Where Mr. Fairfax had been bullishly vigorous despite his age and infirmity, this man was more like the ash tree by the house: gnarled and twisted, but holding tenaciously to life. He had a shock of gray-white hair, and a narrow face that disintegrated, as he drew near, into a web of lines, a limestone surface with bumps and fissures. His clothes carried an air of somber correctness: he was dressed in an old-fashioned tail coat of dark black velvet, from the sleeves of which gray, liver-spotted fingers protruded. His striped pants were incredibly thin, his shoes as long and pointed as his nose."

“Of the first few hauntings I investigated with Lockwood & Co. I intend to say little, in part to protect the identity of the victims, in part because of the gruesome nature of the incidents, but mainly because, in a variety of ingenious ways, we succeeded in messing them all up.”

“In fact, it wasn’t at all an ugly hallway; in bright sunlight it might have looked quite pleasant. But not so much now, with the last light from the door panes stretching out like skewed coffins on the floor in front of us; and with our shadows neatly framed inside them..”

"With his glasses off, his eyes looked small and weak – blinky and a bit baffled, like an unintelligent sheep that’s taken a wrong turn. But when he put them on again, they went all sharp and steely, more like the eyes of an eagle that eats dumb sheep for breakfast.”

“..George Cubbins, handsome as a freshly opened tub of margarine, as charismatic as a wet tea towel lying scrumpled on the floor.”

Frightening or Intense Scenes: A few intense scenes and slightly scary scenes. I'm a young teen and I though they were fine but I wouldn't recommend it for anything younger than a 10-year-old

A girl named Lucy works at a company, "Lockwood and C.O.", with co-workers Lockwood and George. They all work as ghost catcher. One night they encountered a ghost nameed Anne Ward. While catching her a fire begins in the house. The owners ask them to pay €60,000 for repair, but the company does not has that much money! Will they be babble to pay off the depth and find the truth about Anti Ward?

It all began with The Problem. One day, for no apparent reason, the dead started to walk amongst the living. Not just walk, but really wreak some serious havoc. Here are the facts of the matter. 1. If you see a ghost, run. 2. Don’t let a ghost touch you, or you’re dead. 3. Only kids can see ghosts. What are we to make of these facts? Well, it’s no surprise when ghost-busting operations hiring children start cropping up. Enter Lockwood & Company. Run by the charming Anthony Lockwood alongside his two compatriots Lucy and George the ramshackle operation is barely scraping by. Enter a job that goes particularly wrong when the kids accidentally burn down their employers’ home, and it would take a miracle to save the agency. Fortunately, a miracle shows up in the form of a very rich and powerful man. He’s hiring the three to take on the most haunted house in all of Britain. The catch? No one’s ever gotten out of it alive. Will our intrepid heroes take on the job, or is there more at work here than meets the eye?