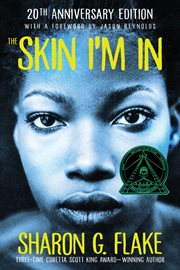 The Skin I'm in

Maleeka suffers every day from the taunts of the other kids in her class. If they're not getting at her about her homemade clothes or her good grades, it's about her dark, black skin. When a new teacher, whose face is blotched with a startling white patch, starts at their school, Maleeka can see there is bound to be trouble for her too. But the new teacher's attitude surprises Maleeka. Miss Saunders loves the skin she's in. Can Maleeka learn to do the same?
Publisher: [United States] : Disney Book Group, 2011
ISBN: 9781423132516
1423132513

Read this book multiple times in middle school, love it

This book should be read by every black young woman who feels they dont belong it very inspiring and heartfelt brung tears to my eyes.

I have to say that I cried when I read this book. It really related to me in some way. (I wouldn't know how to explain it)

Very good book, it is so deep and very good. I would recommend this book ! :)

I love this book . I use to have problems because I was dark skinned until I read this book. Please read

I LOVE THIS BOOK SO MUCH OMG

maroon_baboon_66 thinks this title is suitable for 10 years and over

ashleyblake225 thinks this title is suitable for All Ages

beatrice16 thinks this title is suitable for 13 years and over

This book is about a book a girl named Maleeka who is being bullied by te color of her skin. A girl named Char who skips class, smokes, bullies, and get suspended constantly. She has an older sister who makes money by stealing clothes and selling them on her block. She turns her little sister Char into a house slave working for her lik during her parties that she has almost everyday.

This book is about a 13 year old 7th grader named maleeka Madison who is put down everyday by students in her school for her skin color. A new teacher transfer to her school and teaches her to love her self and not care about what people say.

The Skin I'm In is a novel. It is the story of seventh grader Maleeka Madison who has low self esteem because of her dark skin color. Thirteen-year old Maleeka Madison is tall, skinny, and dark-skinned. That's a problem for her, because it's such a problem for everyone else at school, it seems. To make her life easier, Maleeka befriends the toughest girl in school. Only bullies force you to pay more than you’d like, so life for Maleeka just gets harder, until she learns to stand up for herself and love the skin she's in.

THIS BOOK IS ABOUT A GIRL WHO IS ALWAY TEASED ABOUT HOW DARK HER SKIN IS. AND HOW HORRIBLE HER CLOTHES ARE BUT ALL THAT CHANGES WHEN A TEACHER COMES TO HER SCHOOL. THIS TEACHER HAS PINK BLOTCHS ALL OVER HER FACE AND SHE DOESNT CARE WHAT PEOPLE SAY ABOUT HER. SO THE FINNALY LEARNS TO SEE IF SHE CAN LOVE HER FACE THAN I CAN LOVE MY SKIN!!!!

There are no notices for this title yet.